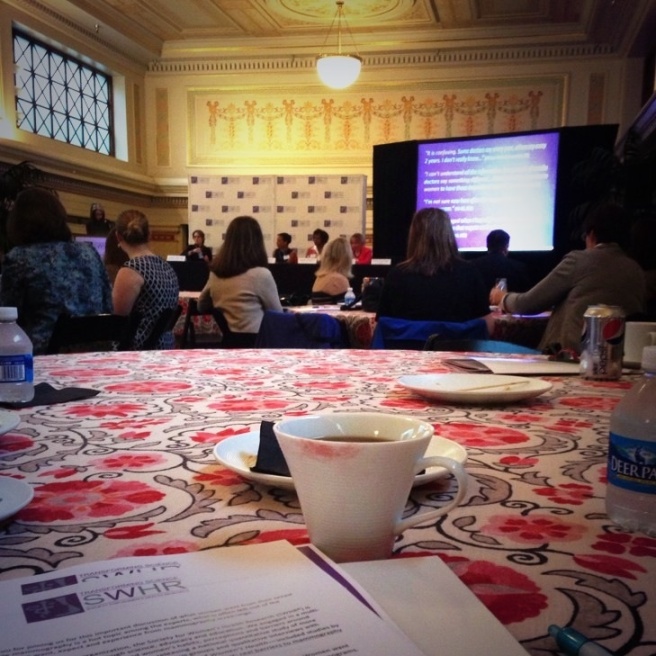 Last week, I had the privilege of attending a forum of the Society for Women’s Health Research.  I’ve been on their email list since I was in graduate school, and when I received an invitation to hear the results of  a recent survey on women’s expectations in breast cancer screening, my interest was piqued. The panel, which included physicians and women’s health advocates, discussed the results of the findings, which were published in a special supplement issue of the Journal of Women’s Health.  Most striking were the findings that while most (nearly 80%) women agree that a mammogram is an important exam, almost half (46%) fail to schedule their own mammogram on an annual basis.  Most often, women cite high cost of care and inadequate insurance and the reasons they forgo screening. The panel also discussed the financial and emotional impacts of recall rate– women who are asked to come back after abnormal mammogram findings.

I love when I can be in a room of intelligent, passionate people– I always learn something new.  Not being a p0litical junkie, and having decent insurance, I have to admit that my knowledge of the Affordable Care Act is pretty limited. Apparently, I’m not alone, because I would have been in the 63% of women surveyed who didn’t know that the ACA mandates that preventative screenings like mammograms are to be covered with no cost sharing to patients. That means they are free, ladies. So cost/not great insurance coverage aren’t an excuse anymore- if you have insurance or medicare, they’re supposed to be free.  Because patient cost was such a deterrent, many speakers circled back to the importance of spreading the message that mammograms are now completely covered.

The second issue that really stuck out to me was the idea of patient recall.  I’m still not 40, so I never had to go in for my first screening mammogram. But I have a little secret to tell you– if you’re 40 and go in for your first mammogram, odds are good that you’ll be called back in. Why don’t they just tell women that from the start? I was chatting with a group of friends, and one mentioned how stressful it was being called in for further screening tests.  Then, one by one, each woman in the group admitted to going through the same thing. Of course, I’m sure that not every woman is recalled after her first mammogram, but with nothing to compare it to and the more dense breasts of a young woman, the odds are good that there will be something that they’ll want to look at a second time.  Not surprisingly, when this study asked women if they would prefer a screening test that could reduce unnecessary recall, the vast majority said yes. Also not a shocker, women said they’d rather use a screening method that found more cancer.  Um, yes. I want a test that does its job, and does it well.

Here’s where cost as a deterrent re-enters the picture…  If you’ve had a mammogram recently, you’ve probably been offered the option to pay an additional fee (from talking with my friends– I know, so scientific!– it’s usually $50) for a 3D mammogram.  It wasn’t until this meeting that I had really looked at the data on 3D mammography. Honestly, if offered that option, I think I might have felt like it was an up-sell– like when they constantly try to tack on services at Jiffy Lube when all you need is an oil change. And this is where I would have been very wrong, my friends.  It turns out that I think that $5o would be well spent– 3D mammography (officially called breast tomosynthesis) can reduce unnecessary recall and increases the diagnosis of invasive cancer.  It is especially effective in women with dense breasts, who are more likely to be recalled and whose cancers are more likely to be missed.  A study in the same supplement looks at the increased cost of the test vs. the cost of additional tests upon recall, and finds that the use of 3D mammography would save at least $50 per patient screened. (I read the study and still don’t understand all the financial details, but suffice it to say that additional imaging and biopsies are expensive, so not needing to do a bunch of them offsets the more expensive test.)  I think the aim of this analysis was to encourage insurance companies that by covering the more expensive test, they would actually save money,  but it emphasized to me that, saving money or not, this test is worth it.  There is a very real financial cost associated with recall– cost to your insurer, yes. But there is also the cost of the co-pay or percentage out of pocket that a patient pays. There is time off work, childcare, and even parking to consider.  (Seriously, why must it cost so much to park at the hospital, am I not giving them enough of my money already?) But on top of the financial burden, patient recall can take a pretty major emotional toll. While I don’t think that avoiding the anxiety that accompanies an abnormal finding is enough to avoid mammography altogether, quality of life should be  considered as we strive to improve screening methods.

I always love the opportunity to “dress like a grown up” and feel even just a little bit professional as I head to a meeting. But even more than that, I love it when I can say that a meeting was really worth my time. When I can leave with a few very solid and concise takeaways, it’s a win. So I’ll try to do the same for you. First, while not perfect, mammograms are important and FREE. Second, 3D mammography reduces the chance that a patient will be called back unnecessarily, and it reduces the chance that a cancer will be missed.  If there’s any way that you can swing it, and especially if you’re under 50, I think it’s worth your fifty dollars.