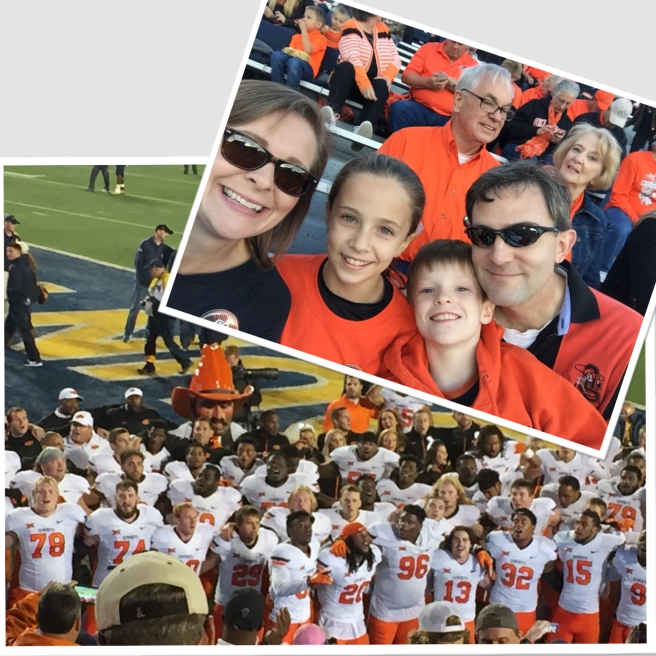 Well, kids, it’s finally happened. I went to a major sporting event in October. The family headed to Morgantown, West Virginia to watch Clay’s Oklahoma State Cowboys take on the Mountaineers in football. We got there early and Emma Clare, who has just made the Swanson Cheerleading Squad, had a blast watching the cheerleaders from both teams before the game. Always one to notice accessories, she pointed out very quickly that perhaps the WVU cheerleaders were wearing pink hairbows and using pink pom poms for breast cancer month. I nodded, and muttered to her that if her cheerleading squad ever wanted to participate in Breast Cancer Awareness Month, we were going to make sure that they did more than just use pink pom poms. (Would love your ideas on that one, but free babysitting services for patients with young kids might just be up there on my list!)

During the game, they highlighted one of the doctors from the university’s breast care center and of course had the obligatory moment when they had a handful of breast cancer survivors on the field wave and get some (pink, of course) roses. I have nothing against anyone honored like that. Those ladies were treated like queens for the day and had a blast, and should the St. Louis Cardinals need anyone to honor, I’m your girl! Just sayin. After that, they asked anyone in the stands who was a breast cancer survivor to stand to be honored as well. I sighed as I heard my mother in law and daughter’s cheerful words, insisting, “Stand up! Stand up!” They were proud of me, they love me. So I stood. (Very briefly.) I’m not sure why it felt weird. But it did– standing with everyone clapping felt weird. And then Emma Clare summed it up perfectly. “That’s an awfully big deal just for staying alive.”

Clay assured me that even though it felt weird, they were, in fact, quite glad I did manage to stay alive. With nearly 40,000 women dying of breast cancer every year (that’s 108 women every day) I guess just staying alive is kind of a big deal. It makes me very thankful to those who have gone before me– researchers, clinicians, and especially those who have participated in clinical trials– who said yes— making it possible for me to stand with all those other people who stayed alive. But more than that, it makes me long for the day when research has come far enough that it’s just not that big of a deal to manage to stay alive.