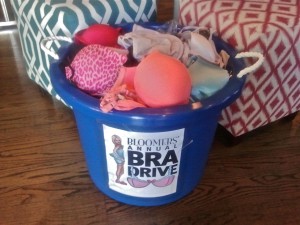 While I’ve been quite the fan of the “unmentionables counter” at Nordstrom for ages, I’ve been making a more concentrated effort to shop local lately.  I’d often seen Bloomers, but was impressed enough to stop in after reading their philosophy– they describe themselves as the “antithesis of the intimidating lingerie shop” and strive to make sure every woman looks her best in any outfit and has comfortable loungewear that looks lovely and feminine, but is young son-appropriate.  But when I saw the announcement for their upcoming Bra Drive event, I was thrilled! They collect gently used bras to donate to Bra Recyclers who give them to women in need worldwide.  I happen to have a bag of bras that won’t work for me anymore, but I didn’t quite know what to do with them.  I even wonder if I was still hanging on to them out of some misplaced emotional attachment.  Either way, when I’m finally free of this sports bra (incidentally just a week or so before the bra drive!) I’m going to need something different.  I happened to be in Shirlington today and stopped in that Bloomers shop and the woman there was so kind and helpful.  She showed me a couple of different options that I can try when I’m allowed out of the sports bra and I literally can’t wait!  They carry the braGG, designed for reconstructed breasts by two sisters who underwent prophylactic mastectomies because they carry a BRCA mutation.  It’s not the prettiest bra I’ve ever seen, but it’s good to know that the option is available, and I’m sure I’ll at least try one on. Personally, I’m hoping that perhaps one of the Eberjey bras she showed me will work– they’re pretty and unlike most underwire free bras (which I hear may be more comfortable after all these surgeries) they actually look like bras.  At any rate, I’m looking forward to getting rid of some baggage and ditching those old bras at Bloomers on October 12.  But more than that, I’m looking forward to finding something new to wear as I start a new, healthy chapter in my life.