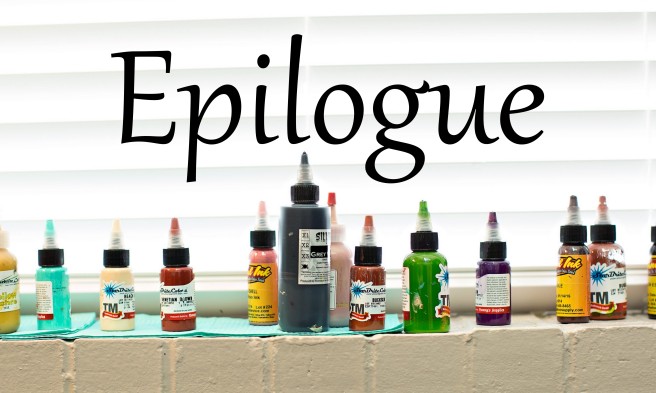 I felt so poetic last week, talking about how Vinnie’s tattoos were the “The End” to my cancer story. Of course, we all know there are only really two things that come after the words “The End,” an epilogue and a sequel. Luckily, we’re not here to discuss Cancer: Part 2. But I was hoping not to have an epilogue to write. Certainly not a week later.

I have been faithfully wearing my silicone scar sheets since January, when I also had steroid injections to help flatten out my slightly bumpy scars.  Of course, before the injection, we discussed the risks, among them: bruising, skin atrophy, fat atrophy. My doctor said these were rare, and he uses the lowest dose available, which he then dilutes again, to reduce any risks.  I had some bruising and as it faded, the scars have completely flattened and smoothed out, but the skin has retained a pink hue in the area. Wearing the scar sheets except when I’m in the shower, I haven’t spent a lot of time worried about the redness because I never really see it.  But I ditched the scar sheets for my trip to Vinnie’s, and he commented (several times) how thin the skin was in that area. It wasn’t where he was going to tattoo, so it didn’t change my plans that day, but his concern gave me something new to obsess over. Just what I need.

I managed to keep my emotions in check for a day or so, but by the end of the second afternoon, I was somehow convinced that my skin was going to burst apart it was so thin, and then after my implant popped out and landed in the floor, I’d need a skin graft to hold it back in. (Yep, a little dramatic. Cancer has trained my brain to eschew the logical and jump right off the deep end. Stupid cancer.) Luckily I was able to get in to see my surgeon the next morning, and he confirmed that the skin was definitely thinner than he’d like, but I was in no danger of losing an implant if I wasn’t wearing a sports bra to keep it from falling out.  While I was dreading the idea of a skin graft (which I’d completely made up in my head, that probably isn’t even close to an option), I was secretly hoping there was some sort of collagen cream or something (also completely made up) that I could slather on once a day to fix everything.  My surgeon’s suggestion was somewhere in the middle.  More fat grafting. At which point my brain sort of turned off. More liposuction from one site, then injecting the fat under the thin skin near my scar. It won’t grow back any skin, but it would support the skin and make it less susceptible to trauma and leave me with a better cosmetic result. Oh, and that probably won’t take care of the redness.  So then he’ll send me to someone to laser it.

Good grief. I was done two days ago. I. Was. Done. I could not comprehend the idea of more surgery. More compression gear.  More restrictions on my activity. I’m sure it wasn’t a crazy reaction. But I told him I couldn’t make the decision that day. I wanted to be done. He agreed, there was no need to rush, we could watch it indefinitely, and make any decisions later. I knew in my heart that I’d likely agree to it, but that day, I just could not.

I gave myself some time to consider my options, and really, I needed to come to grips with the fact that I needed, no, I wanted, more surgery. Yes, I want to be done. But I want to to finish well. And so I called the office and asked to schedule the surgery sooner rather than later. I’m still waiting on the final date, but am hoping to do it within the next couple of weeks. It will be outpatient surgery, and I’ll be in compression gear (super glam spanx-y bike shorts and the wretched ugly compression bra) for probably four to six weeks. I’m hoping not, but betting it will mean more pain meds and more time on the couch than on the trails.

I remember pre-cancer, thinking how great it was that now women can have a mastectomy and reconstruction at the same time. How cute and naive of me. I knew a lot about breast cancer, but didn’t realize that even in the simplest scenario, there are two surgeries and several procedures involved. Many women who opt for a lumpectomy have multiple surgeries to make sure that they’ve gotten all the cancer, only to end up with a mastectomy, either out of medical necessity or for their own peace of mind.  I didn’t mean for this post to be a downer, but I guess this is just a glimpse of the fact, that even under the best circumstances, breast cancer isn’t easy. I’ll be fine physically, and that’s the most important. And though it will take longer, I’ll get over the fact that I have to go through another round of surgery and restrictions.  Because while I’m not thrilled to be writing an epilogue, I’m really glad I’m not writing a sequel.