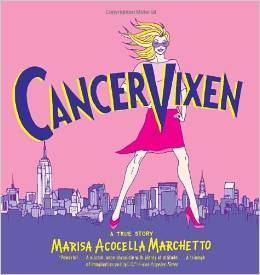 When I was diagnosed with breast cancer, several well meaning friends and family members gave me breast cancer books.  They were such thoughtful gifts, and I really did appreciate each one.  They were mostly the kind of books that had soft images of flowers on the front, they were probably really touching, inspirational, and encouraging.  I’m not sure because I only read (most of) one of them.  Somehow they didn’t scream “entertainment,” and that’s a pretty important component of any book that’s going to hold my attention long enough to finish it.

The day I had my head shaved, I first met the woman I consider my “cancer mentor.” She had finished treatment about six months before, and had tips, advice, and could commiserate over pretty much anything I wanted to discuss.  She has a great sense of humor, so when she suggested a book, I was all in.  Cancer Vixen didn’t disappoint.  It’s hilarious, a little irreverent, and so very true.  Any time a book has a magnification of little green cancer cells giving you the finger and mentions several new MAC lipstick shades I need to try, I think it’s a win. There were so many things to which I could relate.  It’s like it’s the book I would have written.  If I were an artist.  A funny artist.  A funny artist living a fabulous life in New York City.

I didn’t really want to read anything insightful, heartfelt, or inspiring.  I wanted to commiserate with a funny friend who knew just what I was going through.  Plus, anytime I can think of myself as some sort of super hero, and a vixen to boot, well, that’s a good thing.