After the morning’s fun un-run, I headed to the Pentagon Athletic Center with a big crew from the clinic to shower and get ready to face the day.  I just love the camaraderie of a bunch of women getting ready together.  There are no pretenses– everyone can complain about their hair as they blow it out, there’s always someone with an eyebrow pencil if you’ve forgotten yours…  After a quick breakfast and a little break, we headed over to the Pentagon Conference Center where I gave my first talk of the day.  Of course, getting my talk from the laptop (which is maybe the oldest laptop I’ve ever seen!) to the screen was a bit of a challenge.  I think it took five of us to figure it out, and the conference center tech guy basically gave up and left us to our own devices before we figured it out.  Somehow it wouldn’t be a power point presentation if there wasn’t a problem with the projector.  (Those who know me well might know that I have a bit of a thing with fonts, so of course they were carefully chosen.  And of course the super old computer didn’t have the same font set, so I ended up with a few things in a rather pirate-y font.  Awesome. I’m sure I didn’t obsess over that and mention it in my talk at least four or five times.)  Once we got it going and I got over the pirate font, it went well.  The talk was open to anyone at the Pentagon, and I was privileged to have the senior staff from the clinic and the head of the Breast Care Center at Fort Belvoir and her chief nurse in the audience, too.  It was a diverse audience, but I think I managed to keep everyone engaged, and there was a great discussion afterwards. 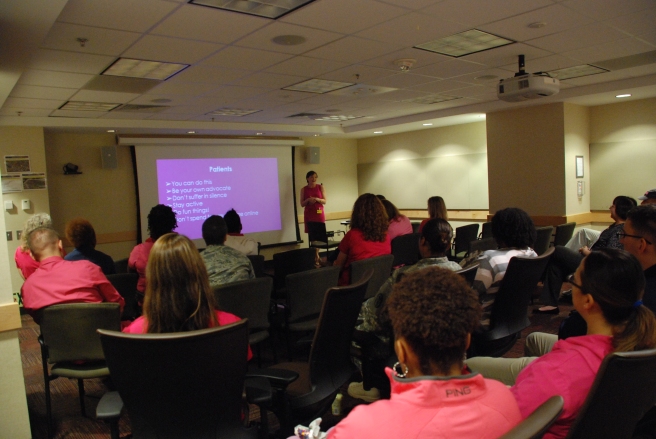 In the break before heading out to the courtyard, I had lunch with the ladies from the Breast Care Center at Fort Belvoir. It was so interesting to share perspectives on patient care, and it was a unique dynamic– since she wasn’t my breast surgeon, I enjoyed being able to talk to Dr. Williams as more of a colleague than in the normal doctor/patient relationship. 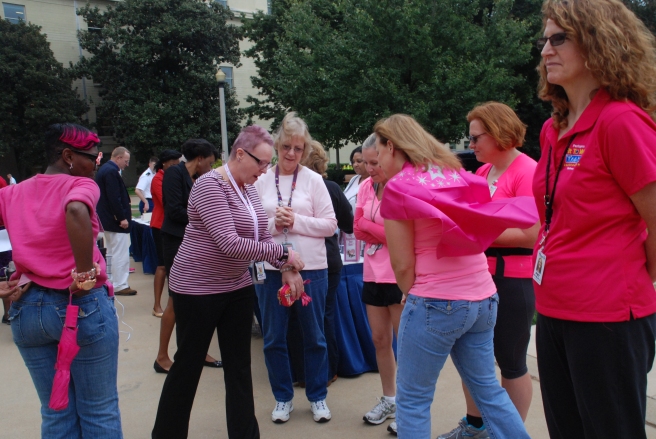 The courtyard event was fun, it was filled with people in pink who were eager to share their own stories.  It was a privilege to speak with so many men and women. 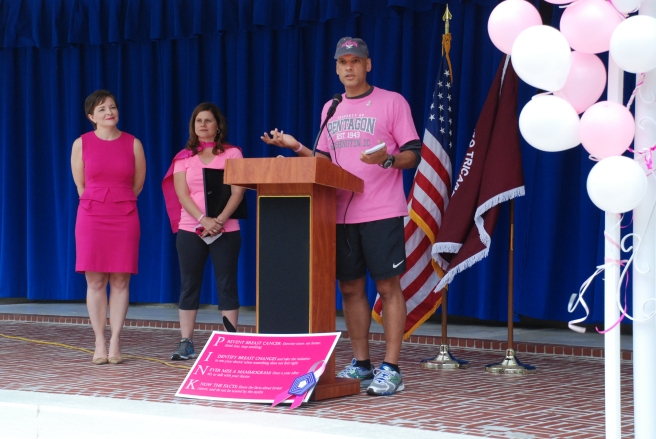 And then I see this picture.  That’s me, standing on the stage in the courtyard of the Pentagon, being introduced to the crowd by the director of the clinic.  Craziness. I don’t get nervous, and feel like I’m taking it all in stride, but then sometimes I just realize– this is a big deal! 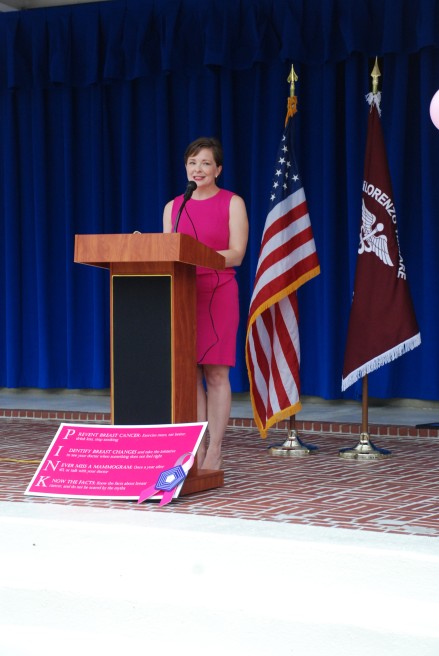 I gave a quick talk, a little about me and a little about how to reduce your risk of breast cancer where you can and the importance of regular screenings before encouraging everyone to join me for a walk or head out on the three mile run that we skipped that morning. 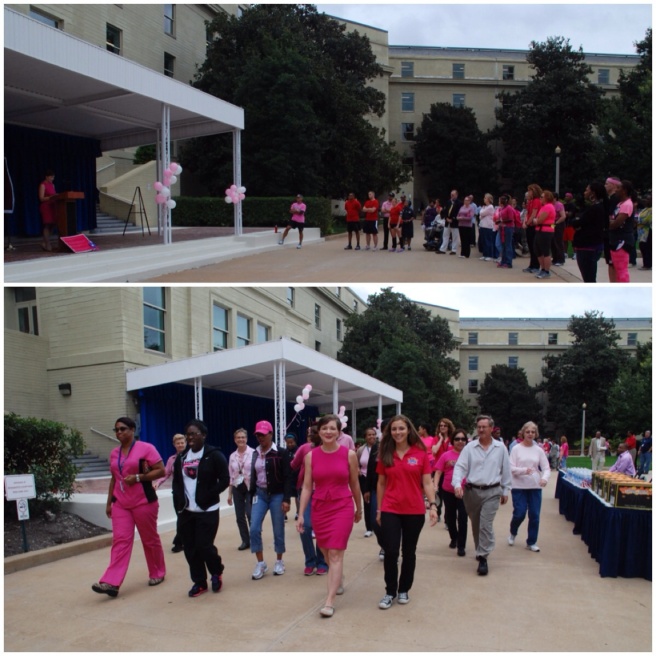 We encouraged everyone to walk for twenty minutes.  You know, for their health.  We’ll just not talk about the fact that each lap went through the designated smoking area.  Little victories, you know? 😉 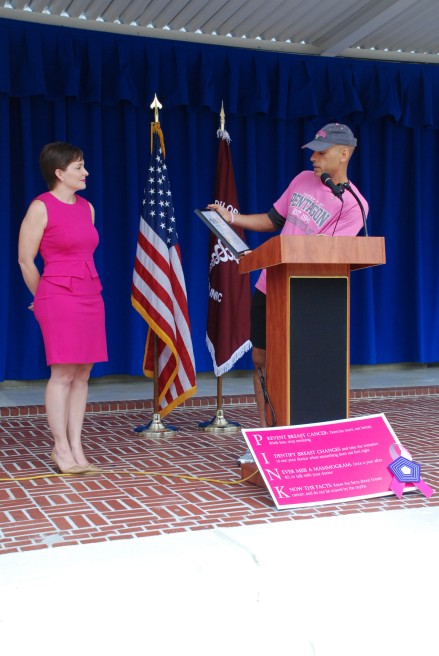 Oh, and did I forget to mention that I got a major award? OK, that might be overselling it a tad, but I did get a lovely framed certificate lauding my contribution the the Pentagon’s Second Annual Breast Cancer Awareness Campaign and a commander’s coin from COL Pina. Very cool.  If I ever get a real job with a real office, you can be sure that bad boy is going on the wall! 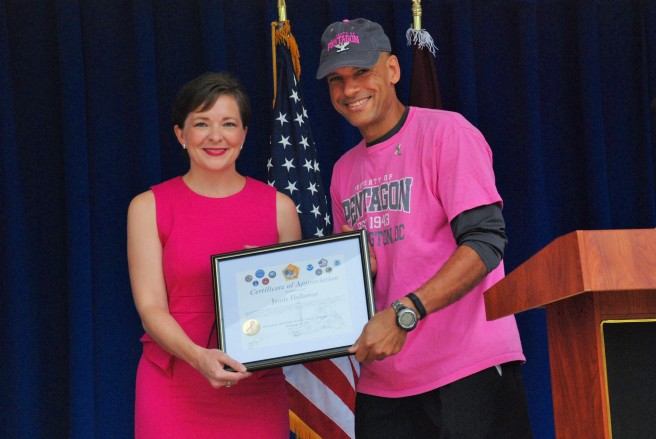 But really the best part of the day? I got to know some great people.  The clinic staff were such lovely hosts and made me feel like a VIP and part of the crew at the same time.  I spoke with several women who either were going through treatment for breast cancer or who had faced it in their past.  We traded stories and bonded in a way that’s becoming so familiar to me.  Karen tells me that she’s gotten great feedback since the event, and one of the women we talked to has even already stopped by the Fit to Win program at the clinic to start on a more proactive survivorship wellness plan. 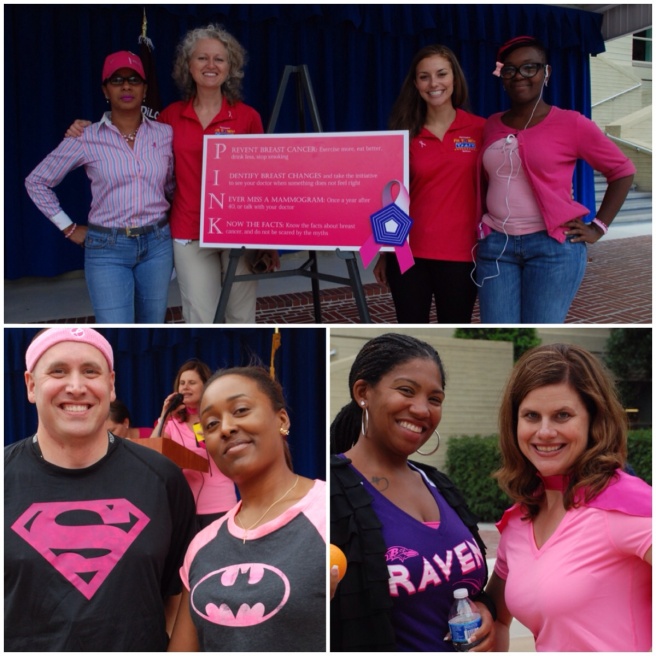 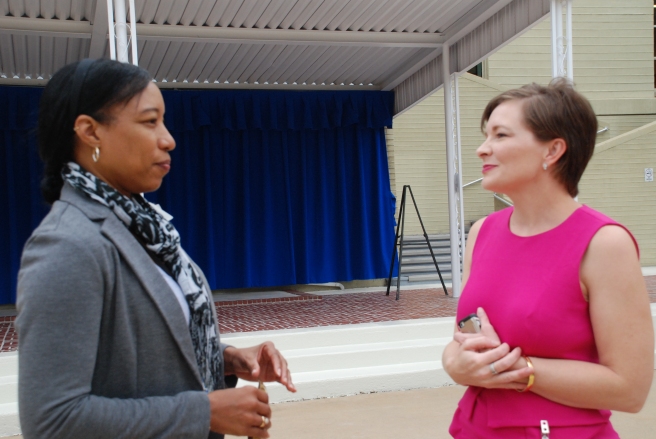 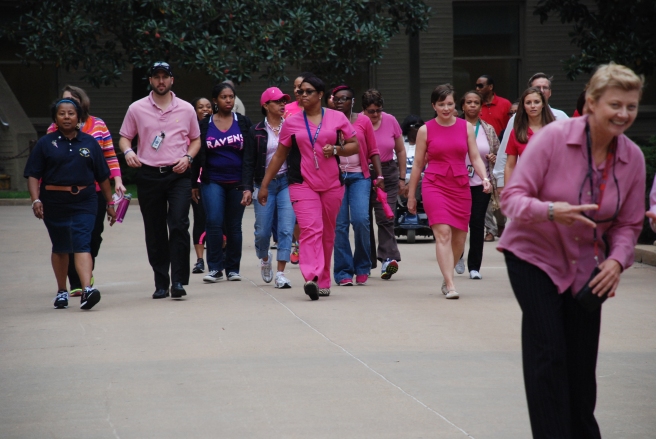 It was such a privilege to get to be a part of a breast cancer awareness campaign that I truly felt made a difference.  There was pink, yes, but I really feel like there was a conscious effort to embrace the teachable moment that the pink provided.  I was able to share some proactive steps a woman can take to reduce her risk of breast cancer, and I was able to incorporate some of the recent data that mammograms are catching cancers earlier.  But I was also able to use my time to remind everyone that there are no guarantees, and despite all the talk of risk reduction, early detection, and even my smile and healthy appearance, nearly 40,000 women will die of breast cancer this year. With so many healthy survivors, it can be easy to gloss over the fact that breast cancer is a serious disease. And while October, in all its pink glory, can get a bad reputation for ignoring the hard parts of breast cancer– the suffering through treatment, what it’s like to live with metastatic disease, the lives it claims– I felt like my October day at the Pentagon was well spent.

Thanks to Natalie at the clinic for the images of the day’s events.